Tai Ji Men Qigong Academy: Nearly a quarter of a century of human rights violations by the Taiwanese government cannot quench Tai Ji Men’s love and concern for the world 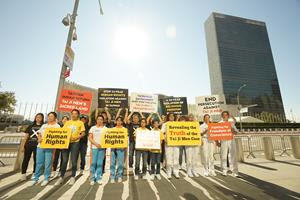 Members of the Tai Ji Men Qigong Academy and Action Alliance to Redress 1219 protest against the Taiwanese government’s violations of Tai Ji Men’s human rights in front of the United Nations Headquarters.

NEW YORK, Sept. 15, 2021 (GLOBE NEWSWIRE) — September 11, 2021 marks the 20th anniversary of the September 11 attacks. On this historic day, over 30 volunteers from Tai Ji Men Qigong Academy and Action Alliance to Redress 1219 (ACT 1219) gathered in front of the United Nations building and other locations in New York to pray for the city, the U.S. and the world, wishing that everyone’s conscience will be awakened, disasters will be prevented, and a world of love and peace will be realized.

Three of the volunteers witnessed the 9/11 attacks 20 years ago. Pamela Chen, a Tai Ji Men member from Los Angeles, arrived in New York on the morning of September 11, 2021. Shortly after landing in the Big Apple, she and other Tai Ji Men members gathered in front of the United Nations Headquarters to spread love, peace, and conscience to New York, the U.S. and the world through their dancing and singing. They also visited Times Square, the Manhattan Neighborhood Network TV Station, Ground Zero, Taipei Economic and Cultural Office in New York and other locations to spread the idea of conscience, love, and peace.

Pamela said that 20 years ago, she witnessed the two planes crashing into the Twin Towers of the World Trade Center. The city was instantly engulfed in terror and confusion, and everyone was desperate to flee. Dr. Hong, Tao-Tze, the leader of Tai Ji Men, and Tai Ji Men members did not leave New York. On September 12, 2001, at the invitation of the Manhattan MNN Television, he led Tai Ji Men to host a ceremony of ringing the Bell of World Peace and Love to pray for the victims, New York, and the U.S. He prayed for the souls of the departed to rest in peace, as well as for the living to be comforted. Traffic in Manhattan was halted at the time, and people were panicking as if it were a world war. The suffering inflicted by the terrorist acts has made people all across the world yearn for peace more than ever. Even though getting around was difficult and some UN ambassadors had to walk for hours to reach the MNN TV station, many arrived at the bell ringing ceremony venue to ring the Bell and make wishes for peace, safeguarding love and peace with concrete action.

Lung Ogle, another Tai Ji Men member, was also present during the 9/11 attacks. Despite being over 80 years old, she managed to travel from Florida to New York on this significant day 20 years later to express her best wishes to the victims, the city, the United States, and the world. She visited the MNN TV Station with a group of Tai Ji Men members. In addition to sharing her vivid memory of the ceremony of ringing the Bell of World Peace and Love 20 years ago right after the 9/11 attacks, she expressed her gratitude to the TV station for broadcasting the program produced by Dr. Hong, Tao-Tze, titled “Commemorating the 20th Anniversary of the September 11 Attacks with Love, Peace and Conscience,” which reminds global citizens to awaken their conscience and respect one another with love and tolerance, as well as urges those in power to administer policies with conscience and avoid violating their people’s human rights. The 90-minute program broadcast on the TV station’s various channels on September 11 and 12 will be repeated on September 15.

In addition to promoting the message of love, peace, and conscience, the volunteers also held signs protesting against the Taiwanese government’s disregard for the rule of law, violation of their human rights, and allowing a few rogue bureaucrats to persecute Tai Ji Men’s master and disciples for nearly 25 years. They chanted slogans in Times Square, such as, “The Taiwanese government has persecuted Tai Ji Men and violated their human rights. The Taiwanese government robbed the leader of Tai Ji Men of his property and failed to return his money. Rectify the false Tai Ji Men case. Return to Tai Ji Men its sacred land. Taiwan’s democracy, Go! Go! Go!” Many onlookers were intrigued and inquired about the case with the volunteers. They expressed surprise that such an unjust case occurred in Taiwan.

Their protest drew the attention of nearby police officers. The volunteers described the objective of their demonstration and stated that for the past 20 years, they have been fighting for justice while spreading love and peace. They utilize their own experiences of victimization to convey the value and significance of freedom and human rights to the rest of the world, in the hopes that there would be no more unjust cases and the world would be at peace. The police officers were moved by the volunteers’ efforts and inquired if they required any assistance.

This group of volunteers stayed in New York for only 10 hours. They took real action to support New Yorkers and pray for the world when they returned to New York 20 years later. They hope that global citizens will rise above history’s scars, care for one another, transcend differences and animosity, and work together to address the world’s current issues. They also believe that the combined efforts from world citizens will prevent future calamities and that love should be practiced to create an era of conscience where everyone enjoys freedom, equality, love, and peace.

Tai Ji Men Qigong Academy: Tai Ji Men is an ancient menpai (similar to school) of qigong, martial arts, and self-cultivation. It has carried forward the wisdom of Daoist philosophy, one of the highest philosophies of humankind. It is an international nonprofit cultural organization. Its contemporary zhang-men-ren (grandmaster), Dr. Hong, Tao-Tze established the Tai Ji Men Qigong Academy in 1966, and since then it has grown to 15 academies worldwide.

Dr. Hong teaches his dizi (similar to disciples) methods to achieve physical, mental, and spiritual balance, and tens of thousands of families have benefited from his teaching. At Tai Ji Men, martial arts and wisdom have been passed down from the shifu (master) to his dizi. Through this time-honored tradition, the shifu and dizi promote the Tai Ji Men culture and martial arts around the world while embodying what is true, good, and beautiful as well as spreading the ideas of conscience, love, and peace. Over the past half-century, the shifu and dizi have self-funded trips to over 300 cities in 101 nations to conduct more than 3,000 cultural performances and exchanges and have been recognized as “International Ambassadors of Peace and Goodwill.”